The 1960s represented a bold step in medical office architecture around the United States toward circular designs to improve care flow.

When I was touring Denver’s Kaiser Permanente facilities in late 2016, my host pointed out a hospital that was being demolished. It was the venerable Saint Joseph Hospital, and what I noticed immediately was that it had two paired cylindrical (or “radial”) towers, just like our former Panorama City hospital, a design universally described as “binoculars.” But taller.

Even though the Kaiser Permanente Health Plan has been operating in Colorado since 1969, and has built numerous state-of-the-art medical office buildings, it has always contracted with local facilities for hospital space. Saint Joseph is one of them.

Although there’s no firm evidence that the Saint Joseph design was influenced by Panorama City, it’s surely not a coincidence. The workflow logic was identical, and the main differences were the stairwell, lobby placement, and lack of an external balcony. It looked more like an overhead view of the Starship Enterprise than a pair of binoculars.

Groundbreaking rites were held Wednesday for the new $8,771,560 addition to Saint Joseph Hospital. The new building, to replace most of the north hall of the hospital, will consist of a pair of 11-story circular towers. Each will a have nurses' stations at the center, and no station will be more than 20 feet from any room.

The new circular towers will be the heart of the 88-year-old hospital. Saint Joseph will be the nation's largest example of the new hospital design, according to Robert Irwin, architect. The circular concept means patients’ rooms and wards will radiate from the nurses’ stations in the center.

It saves steps for the nurses [in this case, patients are within 20 feet of the nursing station]; it reduces the number of special duty nurses; it keeps the nurses to a central area outside the patients’ door, and it is particularly useful for keeping patients under observation at night with a reduced nursing staff.

The Saint Joseph Hospital “twin towers” were dedicated in 1964, so they were just more than 50 years old when our new hospital opened. The towers were part of an ever-expanding hospital that had been on the same site since 1898 and were inspired, in part, by the towers of the preexisting structure.

Predecessors to this design were a never-built Kaiser Permanente geodesic-dome-based facility from 1957, followed by the “Atomedic Hospital,” which originated in the early 1960s. But these facilities were never meant to be more than one or two stories tall.

Hospital architecture scholars Stephen Verderber and David J. Fine have noted that there are a few other examples of multistory “radial” layouts in the United States, all built in 1964–1965. These include the Lorain Community Hospital (Lorain, Ohio), the Scott & White Memorial Hospital (Temple, Texas), and the Central Kansas Medical Center (Great Bend, Kansas). The Prentice Women's Hospital and Maternity Center in Chicago, which opened in 1975, was a unique version of this style with four radial towers. It was vacated in 2011 and was the subject of intense preservation efforts to avoid demolition. It was eventually torn down in 2014.

Prentice was designed by Bertrand Goldberg, who drew on learnings from anthropology and the field of “proxemics” (“the study of our use of space and how various differences in that use can make us feel more relaxed or anxious.”) It was praised for its innovative design and engineering prowess. However, many of the design weaknesses of the wedge-shaped rooms were noted as well. Architect and critic Jain Malkin pointed out that the most heavily trafficked side of the room was the narrowest, and in the case of Prentice, that the rounded exterior wall reflected and amplified sounds in a space that’s supposed to be quiet.

Of all of these architects, it was Dr. Garfield and his Panorama City vision that pioneered this bold experiment in improved workflow and patient care. And, as I saw in Denver that cold October morning, the circles of history closed in on the “circles of service.”

Special thanks to Stephen Verderber, and Colleen Magorian and Tiffany Anderson of Saint Joseph Hospital, for their help with this article. 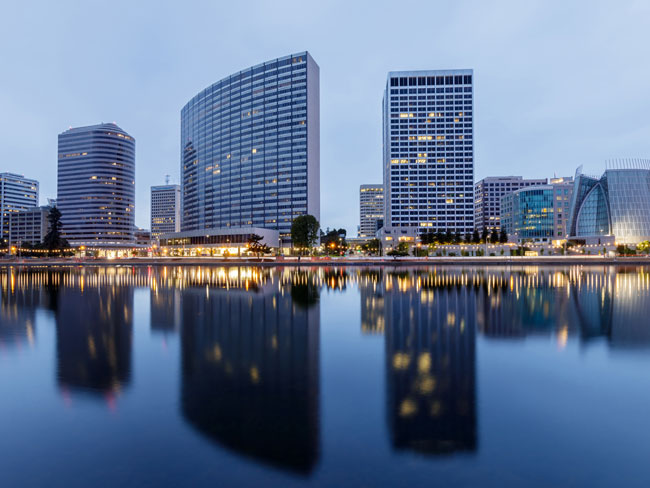