The eyes didn’t have it.

In 1967, artist Emmy Lou Packard created a stunning mural, “Peaceable Kingdom, the Garden Before the Fall of Man,” for the Kaiser Industries’ flagship Oakland headquarters. A prankster, she slyly swapped out the glass eyes of the lion and the lamb, but got into trouble.

"Taxidermy eyes removed because patrons were uncomfortable with the eyes watching them over the bar,” she lamented on one of her sketches.

For 38 years, that bas-relief mural has rested in storage, but this spring it was briefly displayed in its full glory. The work of art is a reminder of Henry J. Kaiser’s support for the arts, a focus that lives on in Kaiser Permanente hospitals and facilities.

“Peaceable Kingdom” was 6 feet tall and 26 feet long, composed of 16 panels cast in basaltic concrete and carved before fully set, and portions were sandblasted for texture.

The 28-story Kaiser Center was built in 1960 on the site of the former Holy Names College on the shore of Lake Merritt as the world headquarters for Kaiser Industries and affiliated companies. This conglomerate produced over 300 products, including steel, aluminum, Jeep vehicles — everything from gravel to guided missile components. It had a combined $1.5 billion in assets, employing 76,000 people in 17 states and 5 foreign countries. The gently curved Kaiser Center was a modern classic, designed by Welton Becket and Associates showcasing Kaiser’s many building materials.

In 1967 — the same year Henry J. Kaiser died — the elegant Mirabeau Restaurant opened on the 3rd floor, looking over the stunning 3-acre rooftop garden. The interior was designed by noted local architect Henrik Bull, who commissioned Packard to create the mural for the cocktail lounge’s back wall.

The lion lies protectively shielding the lamb, but the lamb has tiger eyes to preserve the balance of nature in the Garden …

The cat and dog and mouse, traditional enemies, live peacefully together, and the cat eats grapes while protecting the mouse in the curve of its tail …

A horned creature somewhat like the triceratops and the stegosaurus combined lurks under the giant fern … he is called militasaurus, and will flourish for a while after the Fall, but like others of the Mesozoic era, will become extinct because he is over-armed …

In 1980, the Kaiser Center underwent a major remodel, and the mural panels were taken down and gifted to the Oakland Museum of California. The Mirabeau continued operation until 1984. Also in the Kaiser Center, on the 28th floor with a sweeping view of Lake Merritt, was the Kaiser Executive Dining Room which opened in 1960.

When Kaiser Industries imploded, the dining room was replaced by the members-only Lakeview Club in 1984. But as business lunching evolved from martinis to kale salads, membership dropped, and it closed in 2000.

In June 2018, Packard’s son Don Cairns and other family members inspected the mural in storage at OMCA. Cairns had watched his mother make it years ago, and remembers seeing it when dining at the Mirabeau. Thanks to the able stewardship of OMCA, the panels are as clear and strong as the day they were taken down. And Packard’s family could once again see the dream of the cat, and the dog, and the mouse, living together in peace. 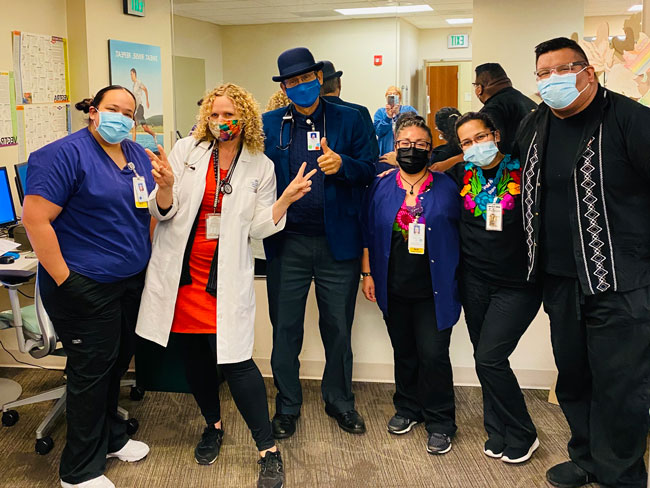 Removing barriers to vaccination in Oregon

Targeted outreach to Black and Latino populations in Portland delivered …