Some pictures may tell a thousand words, but others are mute until prompted to their stories.

Recently I’ve had the pleasure of working with a remarkable collection of vintage photographs taken by Emmanuel Francis Joseph. Born on the Caribbean island of St. Lucia, E.F. Joseph was among the first professional African American photographers in the San Francisco Bay Area. He documented personal and public events, mostly within the local Black community, from 1930 until his death in 1979.

His life’s work almost went to the recycler, but social services organizer and family friend Careth Reid stepped in and saved it. Since 1980 she has been the caretaker of the approximately 10,000 large-format film negatives which will eventually go to the Special Collections Library at San Francisco State University for full processing and cataloging. (Reid earned her master's degree in social science from SFSU in 1970.)

The World War II Kaiser shipyards in Richmond, Calif., were the crucible for shaping what today we know as Kaiser Permanente, and during the war Joseph worked in the shipyards as a photographer for the Office of War Information. Many of the best known photos of Black employees in those yards were taken by Joseph, including iconic Black women welders and launchings of ships named for famous African Americans.

Joseph filed his negatives in small annotated paper envelopes, which Ms. Reid has sorted into scores of subjects; one set of negatives under “Unions” was labeled “Boiler Maker Baseball Team” dated June 18, 1942.

We know that the International Brotherhood of Boilermakers, Iron Ship Builders and Helpers of America was the largest and most powerful union in the shipyards, and that it refused to hire Black workers (and, at first, women as well). But wartime pressure to expand the workforce resulted in the use of the shameful separate-and-unequal “auxiliary unions.” There were 3 such auxiliaries in the Bay Area: A-26 (Oakland), A-36 (Richmond), and A-33 (San Francisco).

The snappy jerseys in these photos tell us that this team was from A-26, composed largely of workers at the Moore Dry Dock Company. During the war Moore built over 100 ships for the U.S. Navy and the U.S. Maritime Commission; it ceased operations in 1961.

Joseph did not record the location of this shoot, but one photo offers a clue. A large sign is visible across the street on the side of the Herrick Iron Works, which at that time was at 1734 Campbell Street in Oakland. So, this field was on the site of the present Raimondi Park, a City of Oakland recreational field named after Ernest “Ernie” Raimondi, a white Moore Dry Dock worker and former professional baseball player on a Moore-sponsored company team. Raimondi was killed in combat while serving in the U.S. Army in France on Jan. 26, 1945, and the park was dedicated in 1947. Moore Dry Dock was located less than a mile away at the foot of Adeline Street on the Oakland Estuary.

In one dynamic photo of a bunt, the setting summer sun casts a long shadow of E.F. Joseph and his camera tripod. More than 70 years later, my white-gloved hands are carefully loading that 4x5-inch silver-based film negative into a digital scanner.

Who were these men? Did any of them move up into the postwar Negro League? Are there any E.F. Joseph photos to be found about a Kaiser Richmond A-36 team? These are just some of the questions that are opened up by these remarkable photographs. History never sleeps, and research finds new paths. Batter up.

Funding from Kaiser Permanente will support 11 local health centers that … 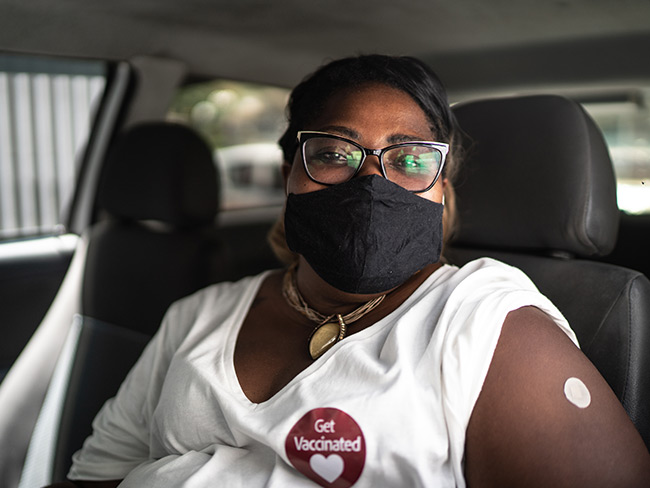 Kaiser Permanente is filling information gaps for COVID-19 prevention and …