Try preparing your tomatoes with a simple soy sauce-ginger dressing. 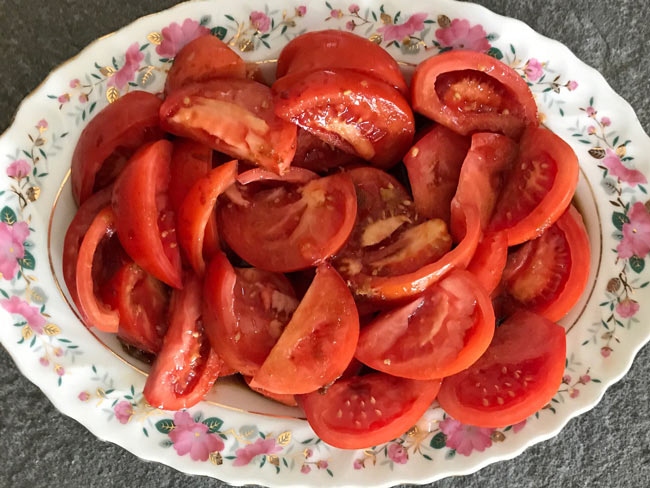 This recipe is an example of a non-recipe recipe in which the delicious and refreshing whole is much greater than the sum of its parts.

When I was spending some time nourishing my mother back to health on the East Coast last summer, I was able to enjoy some excellent summer produce, especially tomatoes. I cooked healthy meals for her and my dad, and I also did my best to stockpile their freezer with several weeks’ worth of meals so they would be able to continue eating well until my mom was back on her feet.

One of the new dishes I made came from a surprising source of inspiration — my father, who doesn’t cook and doesn’t usually make specific food requests. But, when I brought home a bag of beautiful beefsteak tomatoes from a farmers market, he asked if I could prepare them the way they enjoy them in Taiwan, with a simple soy sauce-ginger dressing. (What he actually said was that he wanted them with “soy sauce and some kind of spice.”)

I didn’t grow up eating this salad, so I asked my mom about it. She said that it’s a common way to eat tomatoes for people in the Taiwanese countryside, especially in the South, where my parents both grew up, and she never thought of it as anything special. She actually forgot about it for many decades after relocating to Taipei and then the United States. It wasn’t until my parents moved back part time to Taiwan about a decade ago that they began to eat tomatoes this way again.

Servings: 4, as a side or starter