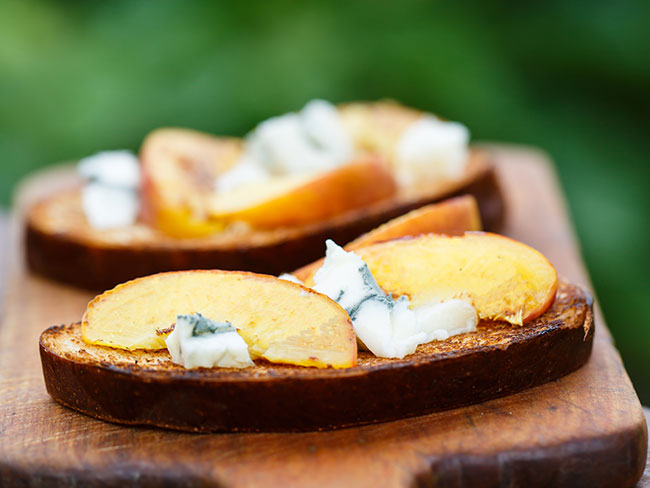 Stone fruits are fruits with a single seed. Cherries are technically stone fruits, but the name is usually associated with peaches, nectarines, apricots, pluots (75% plum and 25% apricot), and apriums (no surprise here — 75% apricot and 25% plum.)

Locally grown organic white peaches play the leading role in this recipe. Many of you may have seen the article in Consumer's Report earlier this spring rating the pesticide levels of 46 commonly eaten fruits and vegetables. The foodnews.org website has the complete listing based on a USDA study.

Conventionally grown peaches and strawberries are at the top of the list for the amounts and numbers of detectable pesticides. The information may influence where you buy various foods. The organic peaches available direct from the farmer at your local market or in your delivered food box are a pristine treat.

I used crostini rather than bruschetta in this recipe for 2 reasons. First, unlike bruschetta, there's agreement on how it's pronounced. Second, I found out that crostini is made with slices of bread 1/2 inch or thinner and bruschetta is usually 1/2 inch to 3/4 inch thick. Using a thinner slice of a whole grain baguette rather than a thick slice of a white flour baguette is better for your health long term.

Buying white peaches from a friendly farmer was easy. He told me which ones to eat the day of purchase and which ones to buy to share with friends 2 days later.

Buying the blue cheese was intimidating. When asked at the cheese store how I liked my blue cheese, I didn't know what to say. A colleague at work suggested, "mellow with an aggressive aftertaste that lingers on your palate." I just got Point Reyes blue cheese again.

These are great for an appetizer, a dessert, or both.