How to catch an alligator

Permanente physician and wife hazard a hunt in dangerous waters of the Amazon.

Editor’s note: Kaiser Permanente physician and educator Martin Shearn and his wife Lori traveled to Brazil in 1973 where Dr. Shearn served as chief of staff for the SS Hope hospital ship docked in Maceio, a poor coastal community in Northeast Brazil. The couple took a few days off from their health care duties to venture into the Amazon River region in September of 1973.

We’d learned to trust our new young guide on the strenuous and magical jungle hike he’d led earlier in the day. An Indian, Manoel had lived on the Amazon all his life so he knew the rivulets and the inlets as well as the paths where there was terra firma to walk upon.

That night after dinner we embarked in earnest on our highly anticipated alligator hunt. Manoel had caught a jacaré¹ once before, he reported, and he had seen another one near where we’d docked our houseboat. We were extremely excited, bundled up in our canoe, aware of the dangers of the hunt. The mystifying sounds of the myriad of the Amazon’s night creatures made for an eerie scenario.

Just as we got ready to depart, a tremendous upheaval almost tipped the canoe as our cook Milton lowered his huge body into the back of the craft. He insisted his presence was essential to record the event on his brand-new tape recorder. Aliomar, our main guide for the Amazon trip, also came along. We were all in a gay mood, all giggles, as Milton planned (in jest) how he would fix the jacaré for breakfast.

We could see Aliomar’s eyes shining with anticipation, for as our guide he wanted us to have a good time. Of course he also was a joyous young man on the hunt for a lark. Manoel, on the other hand, burdened with his responsibility and aware of the dangers, was solemn and quiet, acutely attuned to the sounds of the night. He sat in the front, paddling; Aliomar, Marty and I sat in the middle, and Milton weighted down the back. Manoel carried our weapon: a lengthy stick with a nail-like protrusion at its tip, and we each had a flashlight.

My mind was racing: How big was he?

We were gliding silently over the dark mirror of the river. We soon entered a nearby flooded riverbed (igapó).² We were told to shine our flashlights in slow circles over the surface – on for only a minute, then darkness again – on for a minute, followed by darkness. We could hear whispered conversation between Manoel and Aliomar, then scary sounds presaging all kinds of danger. There were lots of nervous giggles and jokes from each of us and then more silence. Suddenly – shhshhshh – Aliomar seriously hushing us: “I see one!”

Both of the young men became very intent, concentrating on the darkness ahead. Manoel directed their actions. Slowly we crept along the watery thicket, flashlights continually scanning the surface. “Look ahead there,” Manoel whispered. And then I saw two distinct red spots, obviously eyes paralyzed by the light and blinking in terror. It really was an alligator, he was clearly frightened and so were we! My mind was racing: How big was he? What if he lashed out with his tail and overturned the canoe and his family came along to capture us for a meal?

Marty still had not seen the eyes. He had to see them! We shined the flashlights again. Oh yes, there they were. Oh, how exciting! Gingerly, Aliomar maneuvered the canoe closer and closer to the spot. Hardly a sound. Then there was just a small tree between us and the shining red eyes.

When our trepidation subsided, I carefully drew close enough to admire the jacaré and even rub his smooth belly.

We were real hunters now, and while we caught our breath, Manoel kicked off his sandals, stealthily stepped into the water and with his bare hands reached out for our prey. There was a lot of splashing in the brief scuffle, and then, he had him! He held the alligator by the neck, the creature continued to flail his tail and his jaws attempted to snap. Manoel handed the jacaré to Aliomar and they allowed him to snap onto the wooden side of the canoe where he struggled for a while and then began to relax.

When our excitement and trepidation subsided, I carefully drew close enough to admire the jacaré and even rub his smooth belly. His eyes were on alert, but the perfect fingers on his front and back legs were now relaxed. He was resigned to his fate, whatever it was to be. We named him Jose dos Santos and jubilantly brought him back to the big boat.

Overnight, our nervous sleep was punctuated by a dozen giant toads that seemed to croak their disapproval. We were all up early the next morning. The river sparkled like a jewel and Jose was still in the washroom where we’d tied him up before we retired.

While I enjoyed my early morning swim, Milton the cook decided Jose would like a swim also. He made Jose a halter out of rope and dangled him into the water near me. Horrified, I thought Jose was free, and I was not convinced that it was safe to swim in the Amazon with a live alligator.

All through breakfast we bragged like successful hunters of old, recounting our tales of courage. And Milton had it all on audio tape! We played the great adventure over and over. At last the sun was high enough for us to get our photographs — triumphant hunters posing with our vigorously kicking prey, holding him this way and that for better angles.

Finally, we gave him his freedom back. He hesitated when he hit the water, but soon he carefully tested first one arm, then the other, and then with a powerful swish of his tail, he was gone. None of us will ever forget him. Quietly we all hoped he’d swim far enough away that we wouldn’t encounter him, bent on revenge, in our next dip in the mighty Amazon.

Martin summed up our adventure on the Amazon succinctly and excitedly in a September 1973 letter to friends back home:

“Lori and I just returned from an incredible journey on the Amazon replete with piranhas (Lori caught and ate one), lizards, alligators (caught one of those also) and various exotic birds." (Martin had skipped the piranha experience because he was allergic to fish.)

“The submerged jungle called igapó was the most beautiful (sight we’ve seen). Ever changing and unchallenged. A remarkable experience and all the more so with not a single beer can or other evidence of garbage.” Try the most popular Food for Health recipes of 2020.

These empanadas are a delicious and filling vegetarian option. 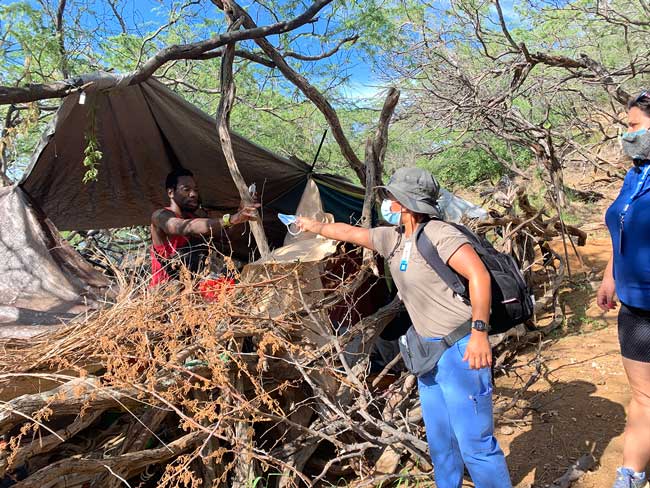 Among the safest hospitals in the nation

Try this creamy and delicious spread on bread or use it as a fruit dip.

Greg Christian and John Yang, MD, will lead the region in providing high-quali …