Denise Bradley-Tyson admires a portrait of her late husband, Bernard J. Tyson, the former chairman and CEO of Kaiser Permanente.

A private ceremony was held at the Kaiser Permanente Bernard J. Tyson School of Medicine to unveil an official portrait of its namesake and champion Bernard J. Tyson, the late chairman and CEO of Kaiser Permanente. The painting, created by Los Angeles-based artist Delfin Finley, celebrates Tyson and the integral role he played in the school’s formation.

The unveiling was also attended by 4 students from the medical school’s inaugural class who were selected by lottery: Samir Fierro, Shannan Moore, Artem Osherov, and Nicholas S. Rodriguez.

“Opening this school was a labor of love for Bernard. His enthusiasm for this institution and for our mission was infectious. He bubbled over with joy at every milestone we reached,” said Dean Schuster in his opening remarks. “Although Bernard wasn’t a doctor himself, it’s no exaggeration to say we want to support the development of future doctors here in his image — to be intellectually curious, creative, thoughtful, and kind, and to find constant joy and purpose in their life’s work.”

Bradley-Tyson shared touching recollections of her late husband’s commitment to the school before the portrait by Finley was unveiled. The artwork has a prominent home on the first floor of the state-of-the-art medical education building.

Finley is a contemporary realist painter known for his representational portraits of people of color, which present his subjects powerfully but with an intimacy and sensitivity that reflect their personal experiences. Kaiser Permanente has commissioned Finley to create a second portrait of Tyson to be displayed at its national headquarters in Oakland.

A deep commitment to health equity

Tyson was a driving force behind the formation of the medical school, which supports students in becoming skilled advocates for their patients and communities. The school’s curriculum is built on the 3 pillars of biomedical science, clinical science, and health systems science, and incorporates the most innovative and effective educational practices available today. Students have the opportunity to learn from physicians and care teams in Kaiser Permanente’s integrated health care system and are trained to examine health disparities and the social factors that influence health.

The school’s board of directors renamed the school after Tyson following his untimely passing in November 2019 to honor his deep commitment to the institution and tireless work on behalf of health equity and community health.

Shopping for toothpaste or diapers? Get a no-cost flu shot.

It’s not too late to protect yourself. And through March 31, Kaiser Permanente … 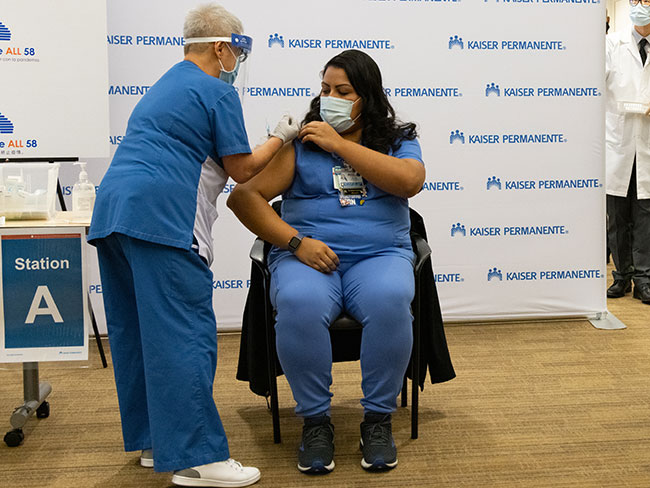 How COVID-19 vaccines were developed and delivered quickly

The vaccines are here. Stephen Parodi, MD, explains why we can — and should …

Among the safest hospitals in the nation

Stay safe in the months ahead

An infectious disease expert explains how to protect yourself and others …

Greg Christian and John Yang, MD, will lead the region in providing high-quali …